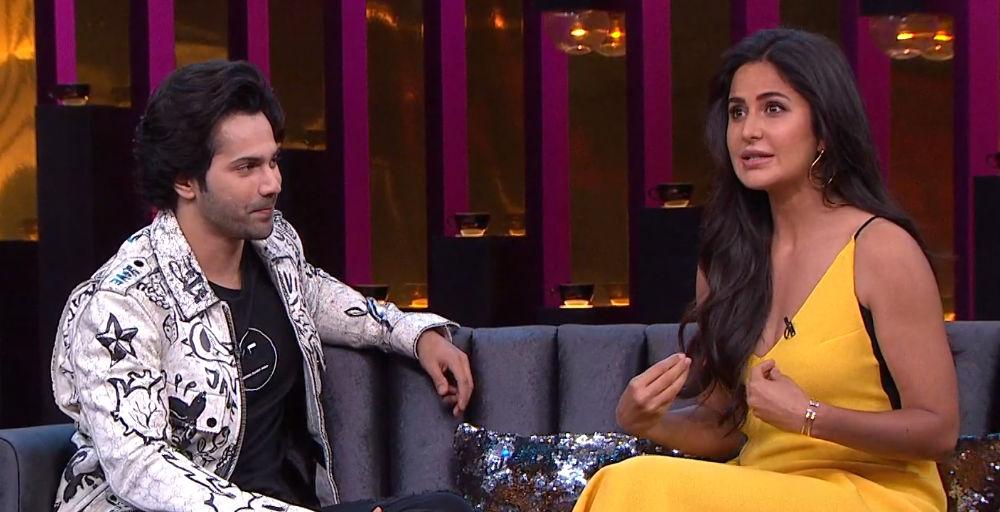 Last night’s Koffee with Karan episode showed us the emotional, witty and outright funny shades of Katrina Kaif that we had never seen before. While Varun Dhawan finally admitted his longstanding relationship with Natasha Dalal, Katrina was honest about life, love and her relationships. Read on to find out all the things we picked up about the Tiger Zinda Hai actress from episode 4 of Koffee With Karan Season 6.

The episode began with Karan suggesting that Katrina and Varun get together since she was not seeing anyone. Katrina scoffed at the idea and then broke into a story about how Varun and Arjun had formed an ‘I Hate Katrina’ club when shooting for Maine Pyaar Kyun Kia?. Katrina thought they started the club because they had a crush on her and she was not giving them any attention. Much to Katrina’s dismay, the actual reason was that the actors were vying for Salman Khan’s attention, not hers. Varun revealed that Bhai used to spend a lot of time with them when they were assistant on the sets, but Katrina changed that. Yikes!

2. She Is A Total Pro In Managing Her Equation With Deepika & Alia

When Karan asked her about her relationship with Ranbir Kapoor’s current girlfriend with Alia Bhatt (Kat’s bestie) and ex-girlfriend Deepika Padukone, Katrina said that she had a maintained an independent relationship with them despite the ‘Ranbir’ factor. She added that despite the fact that Alia and she weren’t ‘everyday phone buddies’, she valued that bond with her and it wouldn’t change for anything.

3. She Thinks Having A Man Is Not The Most Important Thing In Life

Karan mentioned that it was odd that all some people wanted to do was talk about Katrina’s relationship with Salman and how both of them were still unmarried. Varun jumped into her defence saying that Katrina has an illustrious career and people should talk about that. Katrina then added that she disagreed with some of her friends who thought it was necessary for a woman to have a man in her life and it was certainly not true for her.

Following the marriage question, Katrina spoke freely about how she was comfortable with the fact that she is single now. “You somehow always judge yourself based on how much love or attention you’re getting from your partner,” she added. “Your relationship suffers just a little bit, and your self-esteem and your image take a beating, which is not a good thing.” She jokingly said that the last single actress of her generation was giving love advice.

5. Katrina Has Many Faces

In a special segment on the show, Katrina’s friend Mini Mathur showed how Katrina has the same reaction to contrasting emotions. She did an impromptu impression of the Ek Tha Tiger actress that sent Varun and Karan as well as Katrina into a laughing fit.

6. She Invited Six People For Dinner Because She Had Only Six Plates!

Mini Mathur gave another hilarious insight into Katrina’s life when she mentioned that Katrina had a routine of just inviting six people over for dinner at a time because she just had six plates. This made Karan break out into one of his trademarks laughs while Varun was left applauding her antics.

7. She Can Survive On Pancakes & Still Look Fabulous

Like most of us, Katrina too has a guilty pleasure – pancakes. The actress admitted that in the rapid-fire segment, but not before director Karishma Kohli revealed in the special segment that she could have it for all the three meals in a day.

In another hilarious part from the special segment, we learnt that Katrina constantly goes through her fitness instructor Yasmin Karachiwala gym bag and takes whatever she likes. Varun and Karan also nodded and Katrina clarified that she always asks before taking and people have also said no to her.

9. She Struggles To Get Her Airport Look Spot On

When Katrina was asked about her fashion faux pas in the rapid-fire round, she admitted that she committed a lot of them to even remember. She went on to say how some people in the industry were “blessed with these super-stunning” airport looks while she just can’t pull them off. She knew it was something that she struggles with, but she has made peace with it.

If you missed last night’s episode, you can watch it on Hotstar, along with all the other Koffee With Karan episodes from previous seasons, right here.