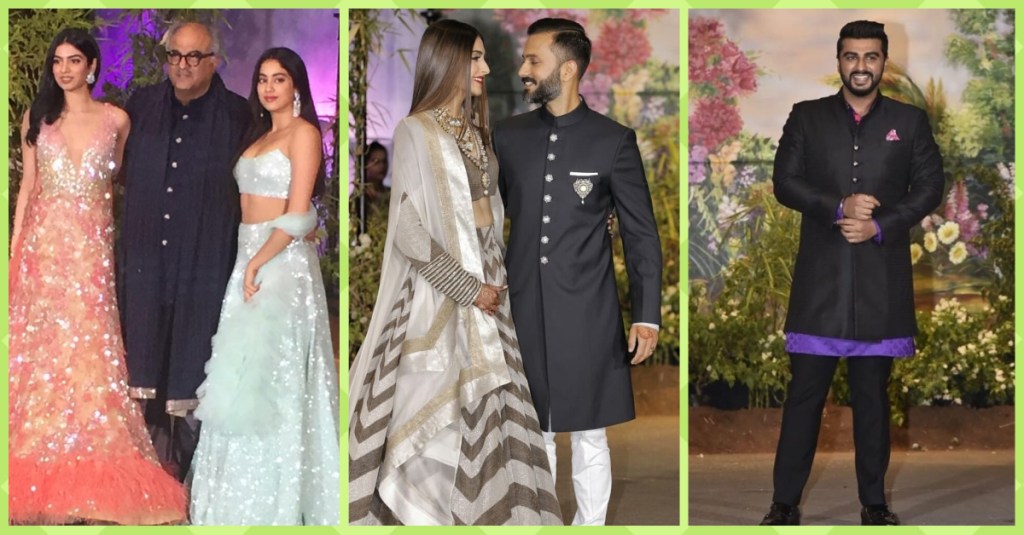 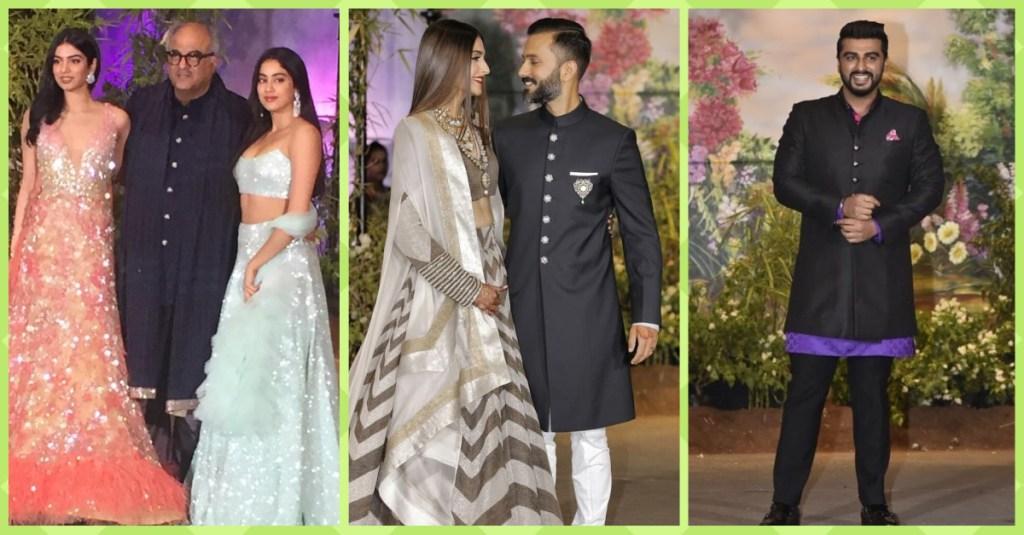 Keeping Up With The Kapoors: All The Looks From Sonam Kapoor Ahuja’s Reception!

Step 1: Host a super intimate Mehendi function at your house for family and friends.

Step 2: Take it up a notch by having a Sangeet function at an amazing hotel. Make sure you have a dress code for your guests, people!

Step 3: Have a day wedding for the natural #SunKissed photos.

Step 4: Throw a massive reception inviting the whole industry and make the world green with envy for not being a ‘Kapoor’.

Your stylish recipe for #SonamKiShaadi is ready. Serve hot!

We were just getting over the pictures of Sonam and Anand from their Anand Karaj today and their cute husband-wife shenanigans, and there they are all set for the reception party.

First look of Sonam Kapoor Ahuja with @anandahuja! ❤️❤️ While @sonamkapoor wore earthy tones by and looked #EverydayPhenomenal in an @anamikakhanna.in outfit, the husband decided to wear sneakers! 😌

Like all their wedding functions, even the reception party has a theme which is Indian and western formals. The couple’s first look as husband and wife is all kinds of goals. From Sonam’s chevron attack to Anand’s sneakers under Indian formals, we’re crushing on it all. But more on that later.

Here’s what the Kapoor clan wore to the reception at The Leela, Mumbai. And try and keep up with them, you guys.

Rhea Kapoor brought Masaba Gupta and some floral frenzy to the reception in an Anamika Khanna lehenga. Who says light florals are for day events! Rhea was seen in Abu Jani Sandeep Khosla couture in all the wedding functions. Wonder what changed her mind for the big party!

The dapper brother, Harshvardhan, came in a crisp suit. Gone are the days of matching the belt and shoes! The tie is the new statement. BTW, did you notice he’s not wearing a belt at all?

Janhvi Kapoor dazzled the media and the paps with her glittering lehenga in light blue, thanks to her favourite designer Manish Malhotra. And how gorgeous is that ruffled net dupatta! That’s how you mix minimalism and monochrome, ladies!

And same goes for Khushi Kapoor with her plunging (ah, the Manish Malhotra trademark) ballgown in coral pink. It’s good to see the Kapoor sisters in opposite dress codes for once, isn’t it?

Unlike all the other brothers, Arjun Kapoor opted for Indian formals. Or did he? Are those formal trousers that he’s wearing with the traditional Indian sherwani because we don’t see a churidaar! Or is it just a lesson in layering for men, Arjun?

In an Abu Jani Sandeep Khosla couture, Shanaya Kapoor chose to continue the streak of whites with her beige halter neck blouse (with a sexy cut-out) and lehenga. And that pink box clutch is totally coconuts! A statement bangle and matching drop earrings are all she needed to complete her party look.

Mohit Marwah was also seen mixing things up by wearing a blazer over the traditional Indian kurta pyjama. Did you notice the alternately coloured buttons on it? Interesting, right? We like how the pocket square matches the velvety insides of the collar. We also love the ivory Manish Malhotra lehenga with a ruffle dupatta that his wife, Antara has on.

Last but not the least, Daddy Anil Kapoor is looking jhakaas as ever in a classic black-tie suit. Nayak flashback, anyone?