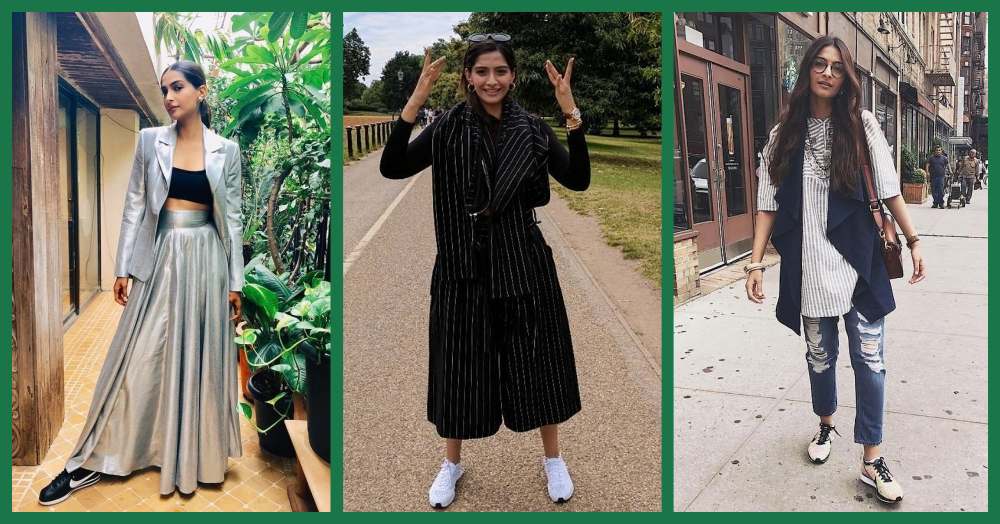 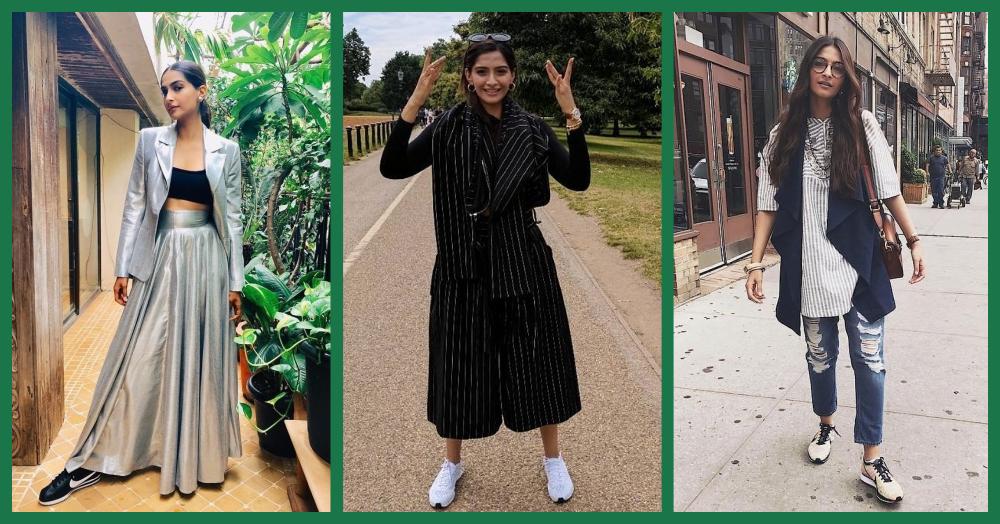 Sonam Replacing Heels With Sneakers For Anand Is More Romantic Than You Think!

Is it just us or is everyone still hovering around, a bit hungover with #SonamKiShaadi? It’s been over 10 days to Sonam Kapoor (Now Sonam Kapoor Ahuja) and Anand Ahuja’s big ‘Punju’ wedding and we’re still reeling from the couple’s cuteness.

Recent Insta-stories and posts from SoNand’s flight to and adorable PDA in Cannes brought us immense happiness… but it’s not over.

We’re here with some more cuteness that is the Ahujas. Yesterday, when Sonam Kapoor decked up for Veere Di Wedding promotions, we fell in love with her look. The Bollywood actress was all over Instagram (and still is), not so much for her metallic grey co-ord skirt set… but more, for wearing a sharp pair of black Nike sneakers with it!

That’s the Sonam we know and love. Ever since she and Anand Ahuja got together a couple of years back, Sonam has been spotted making more space in her wardrobe for sneakers.

As you know, her doting husband, Anand, owns the very well-known sneaker retailer, VegNonVeg and is a self-admitted sneakerhead (looks like the ‘s’ in Anand’s Instagram bio name might stand as much for ‘sneakerhead’ as for ‘Sonam’). Her shoe obsession makes more sense now, doesn’t it?

Just a couple of days back when Sonam Kapoor was getting ready to leave Cannes for India, Anand posted pictures of his wife in a pair of Nike ‘Jordans’.

She wore them with a baby pink pantsuit and looked fabulous, obviously.

It’s now that we realised that over the years Anand posted a series of pictures of Sonam in the coolest sneakers ever. All courtesy VegNonVeg, we’re guessing…

We might have missed Sonam in these #everydayphenomenal shoefies but the tags on the sneakers were always there! So romantic, we can’t even.

A couple of months back Sonam even put up an Insta-story showing off her fiance’s unusual way of being romantic – with sneakers he bought for her!

No wonder she’s obsessed with them now. We’re not mad, because if there’s anyone who can pull off sneakers with everything it’s Sonam Kapoor. She slays the look, from traditional Indian to sophisticated western.

She also wore sneakers with the sexiest outfits in her upcoming movie Veere Di Wedding!

And it’s not just her! Her whole family, including siblings Rhea and Harshvardhan and her dad and Bollywood veteran, Anil Kapoor, are in love with sneakers. Even more so with Anand Ahuja, we’re sure.

BRB, shopping for a year’s supply of sneakers.