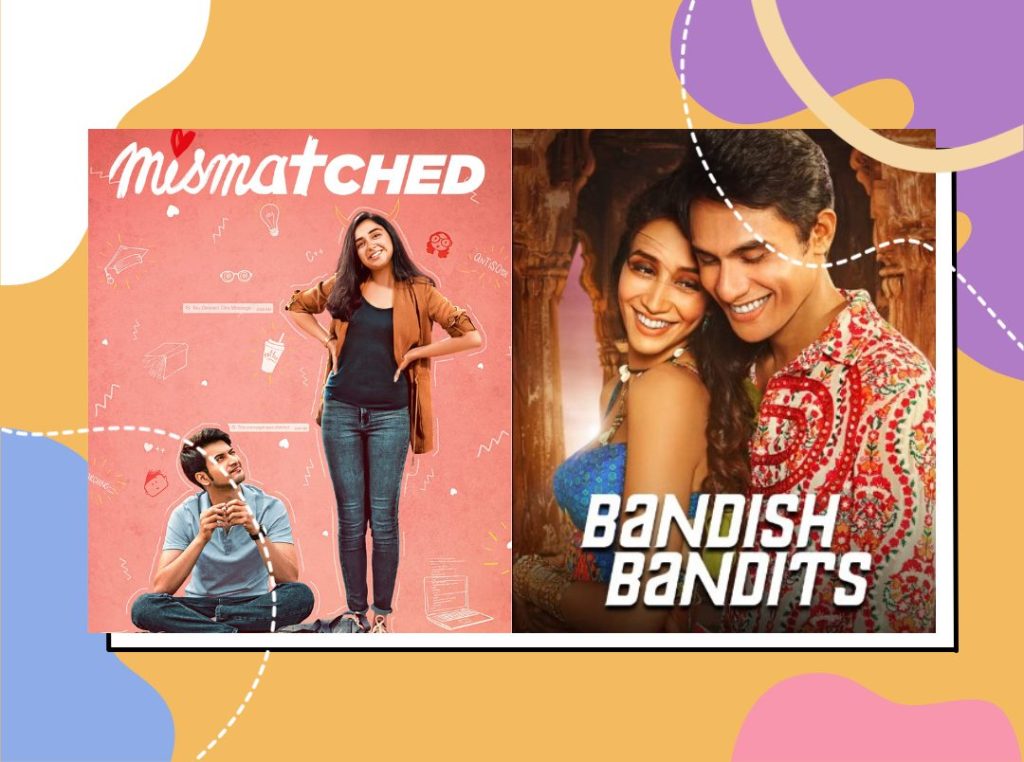 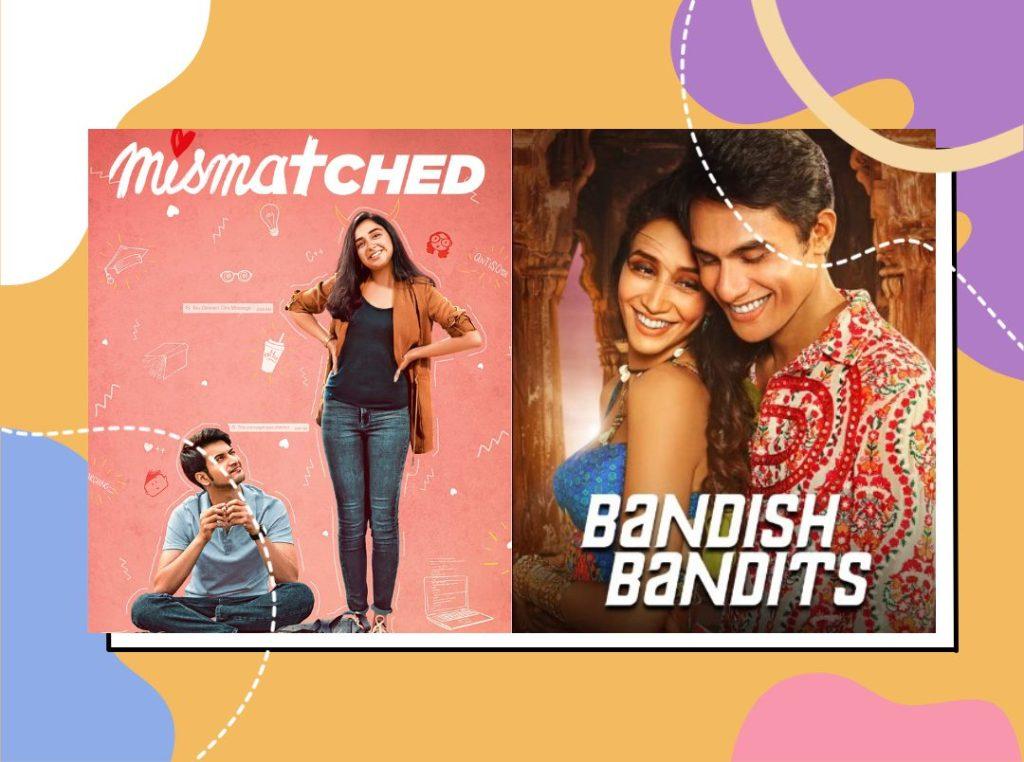 If you guys are anything like me, you’ll relate to my craving to watch something romantic during winter time. Well, nothing can beat the amalgamation of a cozy blanket, a hot cup of cocoa and a romantic web series that leaves you feeling fuzzy. So girls, if you too want to unwind with bae, here’s our list of romantic web series that you should definitely go through.

15 Best Indian Romantic Web Series List That You Must Watch

Check out our list of the 15 best Indian romantic web series to binge watch!

Taj Mahal 1989 is a beautiful series, depicting intertwined love stories set in a pre-internet era, in Lucknow. First, the series follows the story of college professors Sarita and Akhtar, who are bound by their loveless marriage because of their busy lives. Then it follows the story of Sudhakat and Mumtaz, who fight societal norms to stay together. Lastly, college students Dharma and Rashmi who are in love with each other but are torn apart because of jealousy and politics. A must watch!

An adaptation of Vikram Seth’s 1993 novel, A Suitable Boy is set in 1951 newly independent India. Lata is a passionate literature student who resists her mother’s attempt to find her a suitable groom. Then she sets on a journey of love and heartbreaks, where three different men try to win her heart. Here she’s torn between family duties and the promise of romance. This Indian romantic web series should definitely be on your watchlist.

If you wanna reminisce about your old college days then you must watch this series. College Romance is about three college friends who are in a quest to find love, laughter and make unforgettable memories. Their fun banters, never ending hustle and screw-ups will definitely remind you of your college times. And their dilemma to choose between love and friendship is highly relatable. The series also got a nomination for Filmfare OTT Awards

Mismatched is a coming-of-age story based on Sandhya Menon’s 2017 novel When Dimple Met Rishi. The series is about Rishi, a simple hopeless romantic who falls in love with Dimple, a gaming enthusiast. He wants to marry her but believes in traditional dating before spending their lives together. The series is an interesting watch with lots of ups and downs.

Feels Like Ishq is an anthropology series of sweet love stories that’ll leave you with a big smile. A collection of 6 short stories of people finding love at the most unexpected places. The series covers marriage, finding love at the workplace, small town relationships, and bonus – an LGBTQ love story.

Broken But Beautiful is about heartbreaks, never ending love and romance. First two seasons capture the story of Sameera and Veer. Veer is unable to cope with losing his wife whereas Sameera is trying to make her broken relationship work. Later, Veer and Sameera devise a plan to help the latter. But unknown to them, their plan takes them on a different route.

Modern Love is a romantic-comedy anthology about love in all its forms. The series explores 6 different and unique love stories – ranging from romantic and platonic to parental and marital. Throughout the series you’ll go through a rollercoaster of emotions, all thanks to their gripping storyline.

This cute and sweet romantic web series has been getting a lot of attention. The audience enjoy the super relatable depiction of a young live-in couple, Dhruv and Kavya. The show covers their daily life and every little thing about them. Dhruv and Kavya are different yet there are little things that are similar in them. Does this not remind you of your first love?

Flames is a cute romantic web series that’ll remind you of your first crush from those innocent tuition days. The story follows a bunch of youngsters who find love and friendship while taking a chemistry coaching class together. Watch this if you enjoy young romance and thank us later.

What happens when you run into an ex-buddy after years? Well, Never Kiss Your Best Friend is about Tanie who goes to the pub with her boss simply because she was bored and had nothing else to do. There, she runs into an old ex-friend, Sumer Singh Dhillon. Now, will they rekindle their friendship or will life take them on a different path? Watch to find out!

The plot of this romantic web series revolves around Priyanshu and Anshul, who are ex-schoolmates and meet unexpectedly on a road trip. Priyanshu comes to Shillong while chasing a girl and runs into Anshul. They both meet and fall in love, well, do they actually? Watch Souomates to find out!

This romantic web series is about finding love in the most unexpected places. Baarish revolves around Anuj, a businessman and his employee Gauravi. The latter comes from a middle-class family where education has always been the top priority. Due to some circumstances, both their families arrange their marriage and then they fall in love. But watching their journey is heartwarming

Music and a love story? I am sold! Bandish Bandits is a musical love story about Radhe and Tamanna. Radhe is a Hindustani classical musician, whereas Tamanna is a pop sensation, both coming from different worlds of music. Throughout the series they both set out on a path of self-discovery.

Cheesecake is a take on a modern day couple and how they deal with interpersonal issues in everyday’s hustle and bustle. Neel and Sameera are a not-so-happy couple who are constantly bickering and arguing. On a mundane day, a lost golden retriever crosses their path. Then while helping him find his home they both find their long lost love for eachother.

The series captures the journey of two wedding planners Tara and Karan, set against the backdrop of modern day Delhi. They plan big fat Indian weddings but amidst all this they discover ugly truths and betrayals faced by the people behind closed doors. An interesting take on our modern day society and a must watch.

So, are you ready with your hot cup of cocoa to watch these romantic web series?

1. Romantic Web Series on Netflix: Get set to tingle your feelings a little bit as we list out the best romantic web series to watch right now.

2. Best Sci-Fi Web Series: Love the mind-bending, futuristic worlds this genre builds in front of you? Whether you’re looking for a space adventure to watch or a superhero saga, check out our list of best sci-fi web series.

3. Best Mystery Web Series: Do you love films that have suspenseful plots? Do you love storylines that send thrills down your spine? Check out our list of best mystery web series to watch.

4. Best Crime Web Series: Gut-wrenching events, mind boggling criminals, there’s something about the genre that’s both eerie and intimidating! Looking to solve a crime? Check out our list of best crime web series to watch.

5. Best Hindi Comedy Web Series: Who doesn’t love inviting a dose of laughter? Break the monotony of your day-to-day routine, check out our list of best Hindi comedy web series.

7. Best Web Series On MX Player: We have curated a list of the best MX Player web series that are totally worth a watch.

8. Best Web Series : Do you need the best web series to watch this coming weekend? Check this out.